WE ARE ON KICKSTARTER!

Back us on Kickstarter!

Thank you again, for your support! Stay tuned for more updates to come from the Story Builders team!

It’s time again to look closer at some of the Story Builders line!

We’re off to Pirate Isle!

Pirate Isle is one of the Story Builders sets that combines elements of the stories of Peter Pan and Treasure Island!

Let’s set sail for the island with buried treasure 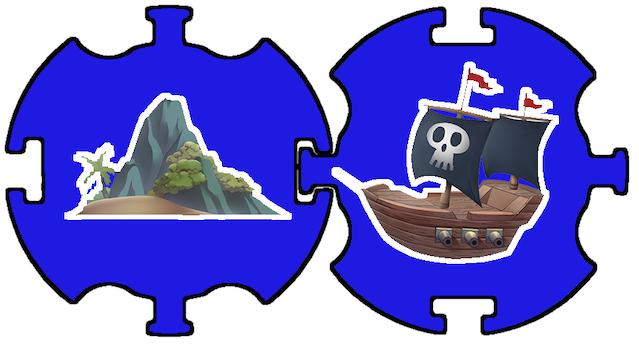 What’s this in the chest?  It’s the holy grail from the Camelot set!  How did that get here?  You had deduced this island might have pirates, but now you better watch out for knights too!

Speaking of deducing, let’s take a look at another game you can play with a handful of random Story Builders.

For two players take the Story Builders and split them into two groups, one for each player.  You secretly select one of the Story Builders to be your evidence.  The other player does the same with theirs.  Now, take turns asking yes or no questions, trying to be the first to figure out your opponent’s evidence.

Is it food? No.  Then move aside all the food Story Builders, now you have less to pick from.

Is is made of fabric?  Yes.  Get rid of the ones that aren’t fabric.

Keep going, you almost got it.  Good job Detective!  You’re finding the evidence!

Back the Kickstarter campaign today, and let’s tell some stories together!

Back us on Kickstarter!
i

Build Your World. Build Your Story.REGROUP & REBOOT Hello, Backers and Friends!  We have decided to cancel our initial Kickstarter campaign.  We are going to take some time, work with our feedback, and change how best to represent Story Builders moving forward....

Build Your World. Build Your Story.WE ARE LIVE ON KICKSTARTER!Hello Backers!       It's that time again!   Real quick: another big thank you to all of our backers.  The messages we have been receiving have been wonderful, encouraging, and downright...

Build Your World. Build Your Story.WE ARE LIVE ON KICKSTARTER!Hello Backers!   First things first, thank you all, for you support and kind words!  Thank you for your belief in this wonderful idea of ours, and thank you for sharing, backing, and joining us on this...

Follow us on Social Media or Send us a Message Below!